There were a couple of recent articles on the growing hydrogen fuel cell vehicle (HFCV) market: 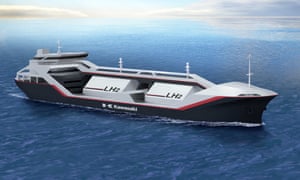 Artist’s rendition of a tanker that will ship liquid H2 from Australia to Japan as a part of a deal between those two countries that will begin a pilot project in 2020. Image source is the above cited article in the Guardian.